Disease Control and Inequalities in a Pre-Digital World

This post by Lonneke van Kampen is part of our series “Global Digital Cultures in times of COVID-19”, written by students of the research master Media Studies at the University of Amsterdam.

A great deal of human history has been written by (infectious) diseases. As the world began to globalize, people travelled and goods were transported, diseases spread. The COVID-19 pandemic has forced us to recognize how susceptible we still are to infectious disease. Hence, this is a good moment to look back. Much can be learned from our history of pandemics, especially in terms of how past governments have tried to control diseases.

In terms of political and economic control, the current pandemic raises a range of concerns over the intense use of data and technology in disease control efforts. The global nature of these concerns have been carefully mapped out in the book Data Justice and COVID-19: Global Perspectives, edited by Linnet Taylor, Gargi Sharma, Aaron Martin, and Shazade Jameson. According to the authors, ‘the pandemic has amplified a nascent epidemiological turn in digital surveillance’ (Taylor et al., 2020, p. 11). The book is based on previous critical scholarship on data justice, which looks at the relationship between datafication and social justice by foregrounding the impact and politics of data-driven processes (see for example Taylor 2017). Data Justice and COVID-19 contains dispatches by contributors from a wide variety of countries, with digital contact tracing and the subsequent launch of mobile apps by software developers emerging as common concerns. Critique on technological solutionism – which places enormous trust in the ability of technology to ‘fix’ things – returns as a common thread in these concerns. This can also be observed in the work of other scholars, including Stefania Milan (2020), Mirca Madianou (2020)  and Gemma Newlands et. al. (2020).

However, little attention has been paid to how current (state) responses to the COVID-19 crisis correspond with earlier disease control efforts in a pre-digital world. This is important for data studies because it matters how we think about ‘the digital’ when being critical of the current data justice issues we are facing. We must be mindful of how relations of power exist in continuation with our past. Indeed as medical historians have shown, there are lessons to be learned from the history of pandemics in relation to social inequalities. I argue that thinking historically includes being aware of the materiality of data and realizing that data is both an object and a concept that is shaped by colonial histories. I would like to highlight the various ways in which past pandemics have been dealt with, to think through how inequality has been created and sustained and reappears in our current crisis.

The Black Plague: Disease and Anti-Semitism

The Black Plague, otherwise known as the Bubonic Plague, was an epidemic that probably speaks to the imagination of many, particularly the image of the plague doctor. While there have been various outbreaks, a large epidemic in 14th century Europe has been well documented. Medical scientists at the time wrote various reports on Black Death-related diagnoses and prescriptions, giving us insight into the kind of medical knowledge and discourses that were common at the time. Scientific authorities had no clue as to the cause of the plague and the blame was put on the alignment of three planets for causing a ‘great pestilence in the air’ (Huremović, 2019, p. 15), although later miasma theory, which blamed ‘bad air’, became a more accepted explanation.

However, an influential and generally accepted interpretation of the plague in Catholic Europe interpreted the plague as a form of divine punishment. Particularly those who were regarded as the ‘gravest sinners against God’ were singled out. Those most targeted included women and minorities, including Jewish people. Antisemitism became increasingly prevalent in the late Middle Ages. Jewish people were persecuted and burned in the late Middle Ages during a Plague outbreak in Europe, being accused of ‘poisoning food, wells and streams’ and were ‘tortured into confessions, rounded up in city squares or their synagogues, and exterminated en masse’ (Cohn, 2007, p. 4).

Discrimination also recurs throughout other pandemics, including the Cholera outbreak, which took place during a period of increasing globalization in the Nineteenth-century in which the free movement of ‘prostitutes and beggars’ was hindered due to these groups being considered ‘carriers of contagion, and, thus, a danger to the healthy urban population’ (Tognotti, 2013, p. 256). Similarly, prostitution became associated with Syphilis after its appearance in Europe at the end of the 1400s. These intensely violent histories highlight how a discourse of blame exploits existing social divisions of religion, 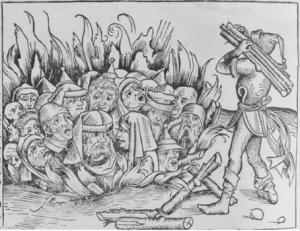 race, ethnicity, class, and gender (Jones, 2020). In a similar vein, sociologist and digital health expert Deborah Lupton provides insightful comparisons between the current pandemic and other major global health topics, such as HIV/AIDS. Reflecting on her own (past) research on these topics, Lupton sees a similarity in the prevalence of ‘scapegoating, victim-blaming, stigmatisation, marginalisation and neglect’ (Lupton 2020). Pandemics have not only deeply disadvantaged minorities and marginalized people, but they have also been life-threatening in ways beyond the actual virus itself.

The Past Today: Three Forms of Inequality

These inequalities highlight how surveillance must also be related to questions around embodiment, as Radhika Radhakrishnan argues in a report for the Data Governance Network. Radhakrishnan presents India as a case study of ‘embodied harms of surveillance’ (2020, p. 2) to argue that surveillance not only undermines data privacy, but also ‘bodily integrity, autonomy, and dignity of individuals’ (2020, p. 2). The belief in techno-solutionism and ‘quantification’ is enabling these inequalities. It is the universalization of knowledge through data acquisition (and therefore a lack of context) that is specifically dangerous.

Part of the problem here, as Stefania Milan argues, is also the way that medical science has historically relied on ‘standard’ testing subjects, meaning there simply was not enough attention paid to ‘variables such as gender, ethnicity, race, or low income as potential determinants of illness and cure’ (Milan, 2020, p. 2). This reveals a paradox: marginalized groups are hyper-visible as targets of control and surveillance, while being underrepresented or entirely absent in certain data sets. Undocumented migrants, for example, are hyper-visible in terms of surveillance and policing, while being unable to access health care, due to legal situations.

This problem is also addressed by Catherine D’Ignazio and Lauren F. Klein in their essay ‘Seven intersectional feminist principles for equitable and actionable COVID-19 data’, based on their recently released book Data Feminism. Discussing the ‘paradox of exposure’ they reveal the potential harms in tracking certain data. Therefore, the answer is not simply to collect more data, since attending to context is deeply important. For many in the Dutch context, for multiple reasons, race remains a deeply uncomfortable social category to discuss. For COVID-19, especially problematic is the ‘colorblind’ approach to race. In a colorblind approach, the mentioning of race itself becomes coded racist, rather than the mentioning of racism as such. At the same time, Dutch doctors working on intensive care have noticed the overrepresentation of corona patients from a non-western background, discussing the possible impact of socio-economic circumstances.

Since data on this is lacking in the Netherlands, it remains difficult to discuss these inequalities. The RIVM (The National Institute for Public Health and the Environment) does not enforce the registration of ethnicity in the case of a positive COVID-19 test. Medical-biological and socio-economic data are registered for research, however, the RIVM argues that there is no clear connection between these factors and ethnicity/race. While the collection of this data remains controversial, the Data for Black Lives project argues, ‘Tools like statistical modeling, data visualization, and crowd-sourcing, in the right hands, are powerful instruments for fighting bias, building progressive movements, and promoting civic engagement’. This race-conscious approach should not be confused with race-based medicine, which essentializes race as a biological variable. Paying attention to context here means to be mindful of the impact of racism, rather than race itself, with regards to health inequalities and COVID-19. The history of sickle cell disease is also relevant here. This race-conscious framework then treats race as socially constructed, though as Kimberlé Crenshaw (1996) has argued this ‘is not to say that the category has no significance in our world’ (p. 375).

It is therefore essential to investigate how these problematic perspectives on race and racism shape (medical) data collection in light of COVID-19. We cannot fix our datasets without navigating this. How do we start addressing this uneasiness, especially in the context of medical data? How do we discuss inequalities while avoiding race-based generalizations? And in light of longer histories of discrimination, how do we resist ascribing these concerns only to digital technologies, as well as resist techno-solutionism?

Lonneke van Kampen is a research master’s student in Media Studies at the University of Amsterdam with a background in Cultural Studies. Lonneke is interested in Disability Studies, environmental humanities, glitch art, bias of AI and narratives around AI. She is also interested in experimental methodologies and exploring how disability activist practices can enrich more abstract and theoretical research (Twitter @Lonnieflex).

Radhakrishnan, Radhika. (2020). ““I took Allah’s name and stepped out”: Bodies, Data and Embodied Experiences of Surveillance and Control during COVID-19 in India.” Internet Democracy Project. https://internetdemocracy.in/reports/i-took-allahs-name-and-stepped-out-bodies-data-and-embodied-experiences-of-surveillance-and-control-during-covid-19-in-india/.