A Space for Arab Digital Cultures

This post was written by Tasniem Anwar and Nermin Elsherif as part of the GDC-funded project “Social Media after the Arab Uprisings”.

In the Global Digital Cultures project “Social Media After the Arab Uprisings”, we argue that one way to move beyond this dichotomy is to conceive these platforms as political sites of cultural production where every day public matters are negotiated and online identities are performed. This pursuit requires taking cultural texts – like Facebook posts, memes, tweets, and reactions – seriously. It is based on examining how these digital technologies are imagined and used by ordinary people. This approach goes together with the growing interdisciplinary field of digital cultures that brings together scholars from media studies, sociology, cultural studies, anthropology, and political science. By focusing on social media in the Arab world, we aim to contribute to a more detailed understanding of how social media enables or restrict political activities, and how it changes relations between the citizens and the state. The goal of this project is not only to produce publishable academic work, but rather extends to creating and cultivating a network of scholars, activists, and artists in/from the Arab speaking world who are concerned with the roles of social media in everyday life. This way we do not only look back on the past decade but hopefully gain a different glimpse of the possibilities in the future.

Tasniem Anwar is a PhD candidate in the Political Science department of the University of Amsterdam working on the legal practices around preventing and criminalizing terrorist financing.

Nermin Elsherif is a PhD Candidate of Cultural Studies (UvA). Her dissertation examines online communities dedicated to nostalgia for the ideal nation in post-revolutionary Egypt. 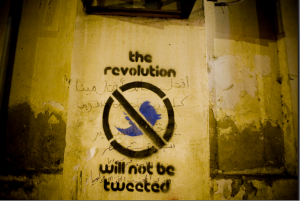 Internet for and against the Colombian National Strike
16/06/2021

Instagram’s New Guidelines: Their Impact on Freedom and Self-Expression
10/05/2021

“Big data sees through you”: Sexual identifications in an age of algorithmic recommendation
16/04/2021